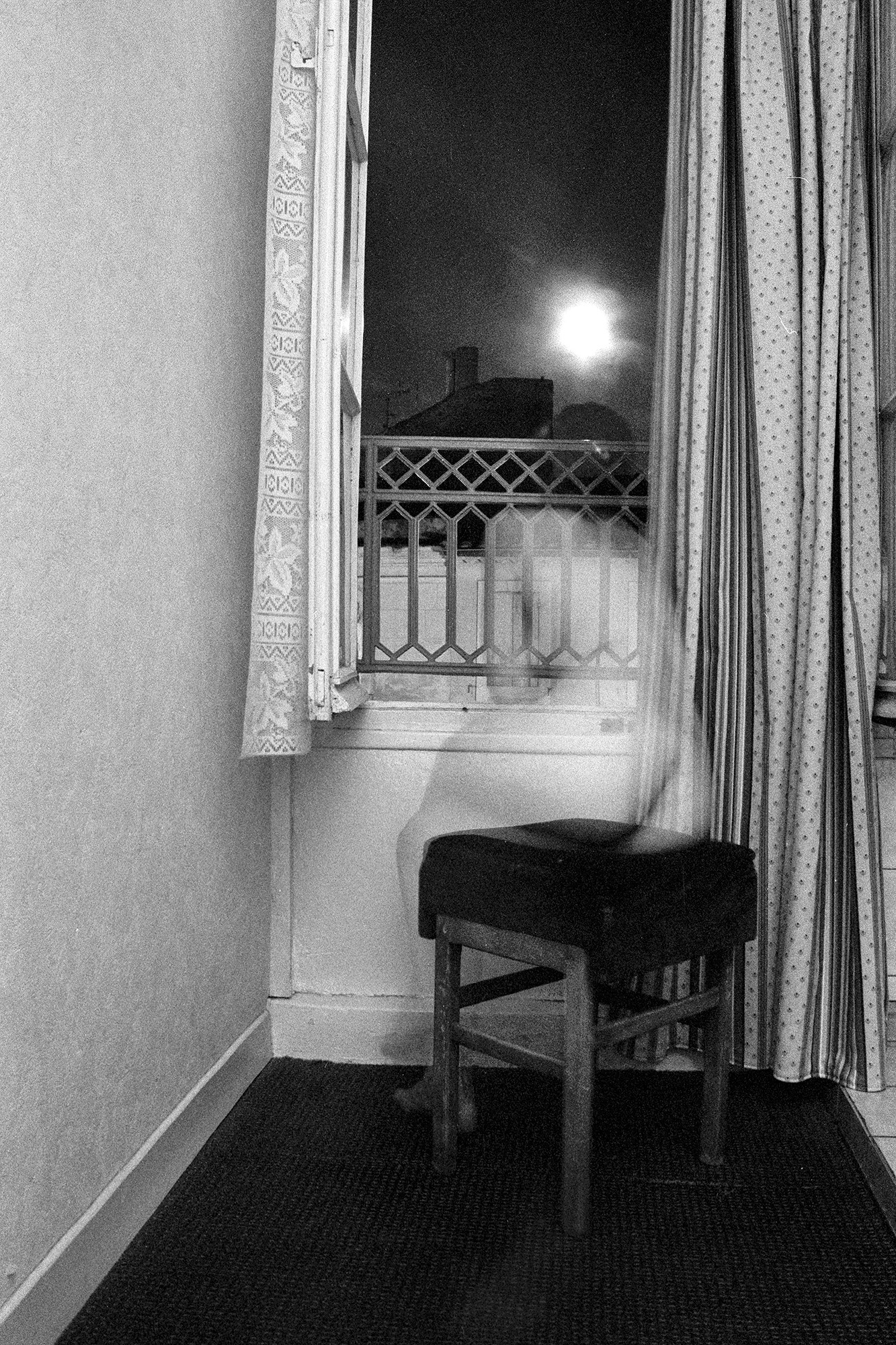 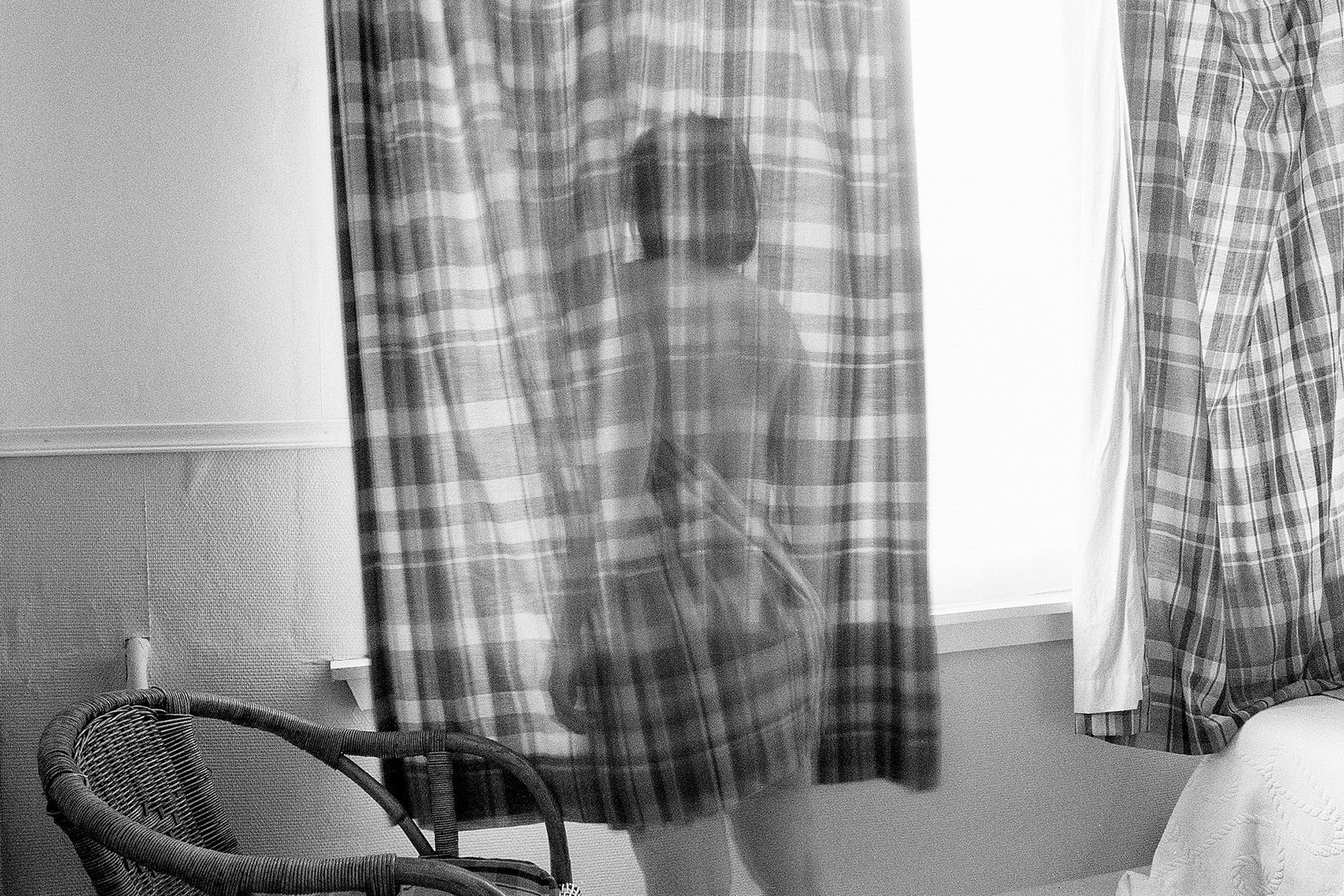 Unlike other languages, photography certifies what it portrays, attesting its existence. Aware of the documentary potential of the mechanical vehicle, Enrica Magnolini uses it to give a legacy of her own experience, opting for black and white films only, using the manual printing procedure in the darkroom, choices which might bring back memory to an ancient ritual and seem to give a greater authenticity to her aim.

The series unfolds through those places the artist considers to be representative of the stages that have marked the path of her individual growth: may they be related to people with whom she shared experiences or to circumstances in which she was, traveling away from home.

The investigation, which sees her as the protagonist of every shot, transcends the mere recording of the environment and assumes a strong autobiographical connotation: the evanescent presence of the body in the space symbolizes the transience of the I-narrator, which shows itself without veils, keeping its face hidden, in order to give the viewer a more authentic personality, lacking transient conditioning to let emerge only the part of the instant in which she is eternalized.

Focused on the introspective research of the author, the images point to a timeless dimension and are not conceived for being read in chronological order: similar to solitary monads, placed side by side, they are only relevant to their singularity and remain suspended between two worlds: the apparent one and the real one. Animated by a metaphysical poetry, the project reveals those aspects of being that the eye cannot see, and it is meant to have a follow up. It draws inspiration from the work of Duane

Michals, who excels in photographing the invisible, as well as that of Francesca Woodman, devoted to the expression of her identity.

She was born in Brescia in 1982 and works between Milan and Treviso.  In 2014 she opened the company MATRICEOTTO SRL, which provides photographic services for fashion companies such as BENETTON, ILGUFO, GEOX, MISSONI, PALZILERI etc.
Since 2011 she has been working as a photography consultant at FABRICA of BENETTON Group in Treviso. She had been previously working as a freelance photographer collaborating with several photographic studios, including SUPERSTUDIO13.
She understands her passion for photography in 2000 and begins to attend a photography course at the Ken Damy Museum in Brescia; she graduated from the “Liceo Scientifico” with artistic title and continued her studies of photography at the European Institute of Design in Milan until 2004.
In 2008 she attended the specialization in scene photography at the Accademia Teatro alla Scala in Milan. She continued to specialize in stage photography attending workshops held by Roberto Masotti in Milan and by Angelo Turetta and Mario Spada in Bolzano.
Since 2003 he has displayed her works in several exhibitions in Italy. In collaboration with the poet Fabio Grasselli she exhibited „CDPDC- città di pensieri di città “ (city of thoughts of the city) at the cutlural centre Artemide in Como. In 2004 they exhibited a personal YDORAIDEI at the Gio Batta and Ferrari Art Gallery in Brescia. In 2004 he was selected at the SACRO visual arts competition and exhibited at a collective exhibition at the S.Fedele Cultural Center; in the same center, in 2007, she showed the urban photography work LA CASA DI LUCIFERO, in 2008 the video work NO SE PUEDE FILMAR, and her works were part of the collective exhibition with the photographic project DONNA PERCHÉ PIANGI?.
She participated in several collections among which UNIVERSI PARALLELI called by I.E.D. Milan and ROOMS at Villa Glisenti in Brescia. In 2009 she was third in the section arte opere uniche e multipli d’arte of the competition announced by TAU VISUL, and in 2010 exhibited in the collective FUORI06 in the Gallery Gallarati in Rome.

She kept on dedicating to artistic research in the field of visual arts and collaborating with many festivals, including the Milan Film Festival, the Contemporary Circus Festival and the Opera Summer. In particular, she follows contemporary dance by collaborating with dancers such as Fattoria Vittadini, Cristiana Battistella and Silvia Bugno and organizations such as Ctr Teatro Venezia and Jam Museum. She participated in the ARTTECECO project at the DID studio in Milan.
In 2009 she co-produced the MAQUILLAGE video dance show, featuring live video. The performance was showed at different European and Italian festivals.